Vogue: Why Walla Walla Should be Your Next Wine Region Vacation

Vogue’s Christina Perez paid a visit to Walla Walla Wine Country and came back with a lot of reasons you should as well. 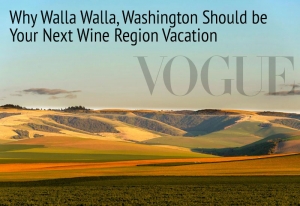 Walla Walla. It’s a fun name to say—and almost everyone who visits has a different way of saying it. The tiny town in southeastern Washington has been making a big name for itself as of late, growing from a small wheat farming community at the foot of the Blue Mountains to a world class wine destination with over 100 wineries in just a few short decades. But unlike many of the world’s most famous grape-growing regions, Walla Walla doesn’t specialize in one definitive varietal or style; thanks to a range of soils, elevation, and micro-climates, the area excels at everything from Cabernet Sauvignon to Tempranillo to Malbec to Merlot. Truly, a wine to suit every taste—and pronunciation. Still, if pressed, locals and critics alike will usually say that Walla Walla
Syrah is the thing to get.

Don’t go expecting the pine trees and misty skies of nearby Seattle or Portland; here, it’s all about rolling hills covered with sage brush or rows and rows of grapevines. In the growing season, the verdancy of those vines creates an otherworldly effect against the otherwise arid land—especially as the sun begins to descend, coloring the sky with vibrant streaks of orange red. Walla Walla’s sunsets are legendary and, truly, some of the most enchanting around.

The best time to visit? Really anytime. But if hard-pressed, aim for the first weekend in May—well after bud break and also when visitors can sample the Spring Release—or, better yet, mid-June, when internationally known growers and expert speakers descend on the town to celebrate the region’s vast canon of wines.

Where to Wine in Walla Walla

For a crash course in Walla Walla wine history, head to the western edge of town to two of the area’s OG wineries. L’ecole, which is housed in a beautiful 1915 French schoolhouse, looks like something straight out of a Wes Anderson film and is an enchanting place to start. The roster here includes award-winning Chenin Blancs and Cabernet Sauvignon, all of which are available to
sample in the schoolhouse’s stained-glass accented tasting room. Afterwards, head next door to the farmhouse tasting room of Woodward Canyon.  Though this winery was integral in establishing the Valley’s appellation, it also makes a variety of wines produced from other Washington grapes, so it’s a great place to learn about—and taste—vintages from the state’s other appellations as well.