There are five key attributes that make Washington State one of the most distinctive growing regions in the world.

Latitude – At 46° N, eastern WA is one of the highest latitude wine regions in the world, resulting in up to 17 hours of summer daylight and the ability to fully ripen a diverse range of varietals. Cold winter temperatures allow for deep vine dormancy and minimize vineyard diseases and pests.

Glacial and Volcanic soils – Individual vineyard soils vary but overall, they are comprised of rich layers of glacially ground sand and silt, loaded with complex minerals and underlain by one of the earth’s largest basalt flows.  These free-draining soils are conducive to deep root growth that stresses the vine and contributes to concentrated fruit flavors in the grapes.

Own-Rooted – Eastern WA is one of the very few world-class growing regions where most of the vines are planted on their own root stock.  In addition to protection from cyclical freeze events, being own-rooted contributes to healthier vines delivering vibrant fruit flavors from a larger conduit of nutrients and minerals.

Washington State is named the Evergreen State, due to the marine influence from the Pacific Ocean.  In western Washington, there is significant rainfall, frequent cloud cover, and cooler summer temperatures. However, eastern Washington sits in the rain shadow of the massive Olympic and Cascade Mountain ranges where it is essentially a high desert – dry, warm, and very sunny.  And this is where we grow our grapes!  With only 6 to 10” of average rainfall, most of which is received during the winter dormant season, we turn to drip irrigation during the hot summer months. Winemaker control on water allows us to better control vine-vigor, shoot-length growth, and ultimately berry-weight and cluster-weight accumulation.

Our long, cold winters push the own-rooted vines into a deep dormancy. With a cool spring, warm sunny catch-up summer, then a cool protracted fall, we see a more intense life-cycle in the plant. The hard winters also reduce over-wintering of pests. With over 300 days of sunshine, we achieve superior plant photosynthesis and we often need to work our canopy management to avoid sun-burning of the fruit. In the fall, there is a large day-time/night-time diurnal swing in temperature, allowing the sunny warm days to ripen the fruit, while the cold nights help preserve the natural acidity and freshness of the fruit.

The geology of eastern Washington is unique, diverse, and molded over millions of years by plate tectonics and immense lava flows.  Ten to twenty-million years ago, open plumes in the earth’s crust in eastern Oregon resulted in a series of lava flows that became one of the largest combined basalt flows on earth (the only one left is Yellowstone). These Columbia River basalts flowed in the general area of the Columbia Valley, producing a weight and compression that created what became the warm heat -pocket of eastern Washington. The resulting basalt is over two miles thick in some areas.  Movements of the North American and Pacific plates formed a series of east-west running folds and crests in the earth’s surface, creating a series of south-facing slopes that provide the perfect landscape to plant our grapes (ridge lines include Horse Heaven Hills, Rattlesnake Hills, Saddle Mountains, and Frenchman Hills).

As the last Ice Age retreated (10,000 to 15,000 years ago) a series of cataclysmic glacial floods inundated eastern Washington. Trapped behind a lobe of the Cordilleran ice sheet, glacial Lake Missoula grew to be about half of the size of Lake Michigan. When the ice-dam collapsed, the largest known flood in the world at 500 cubic square miles of water (10 times all the rivers in the world combined) came roaring through eastern Washington, stripping the land down to the bare basalt, and ultimately carving the Columbia River Gorge. Some estimate as many as 100 repeated glacial floods occurred. The floods were held back by the basalt formations at Wallula Gap, creating flood waters that backfilled the Yakima and Walla Walla Valleys. The flood waters crested at an elevation close to 1,200 feet, leaving pieces of granite glacial erratic strewn in the landscape. These floods deposited much of the well-draining sand, silt, and loam becoming the foundation for our soils. 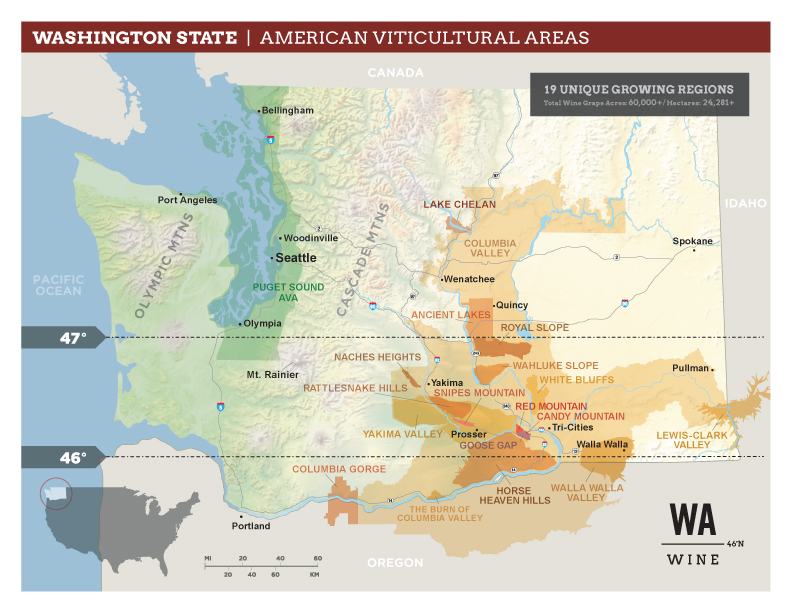 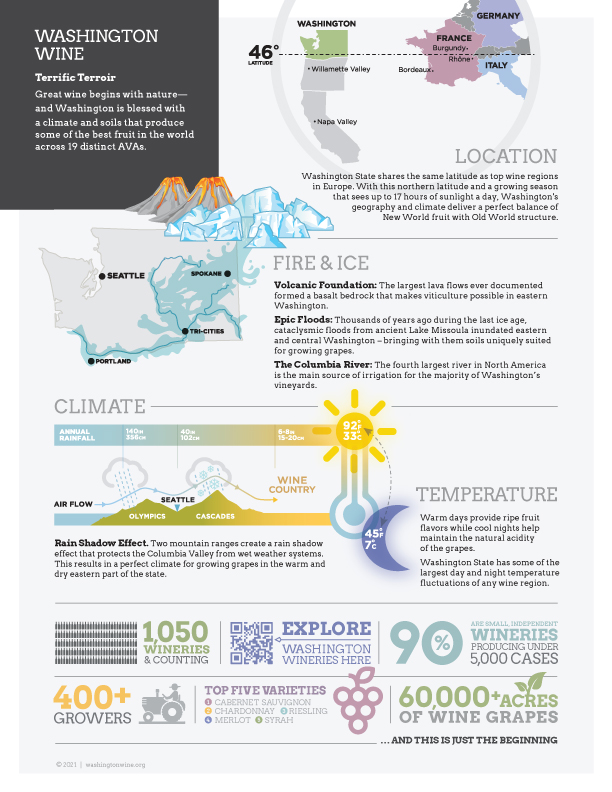 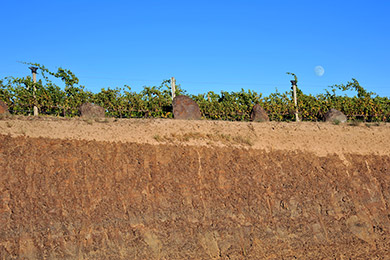 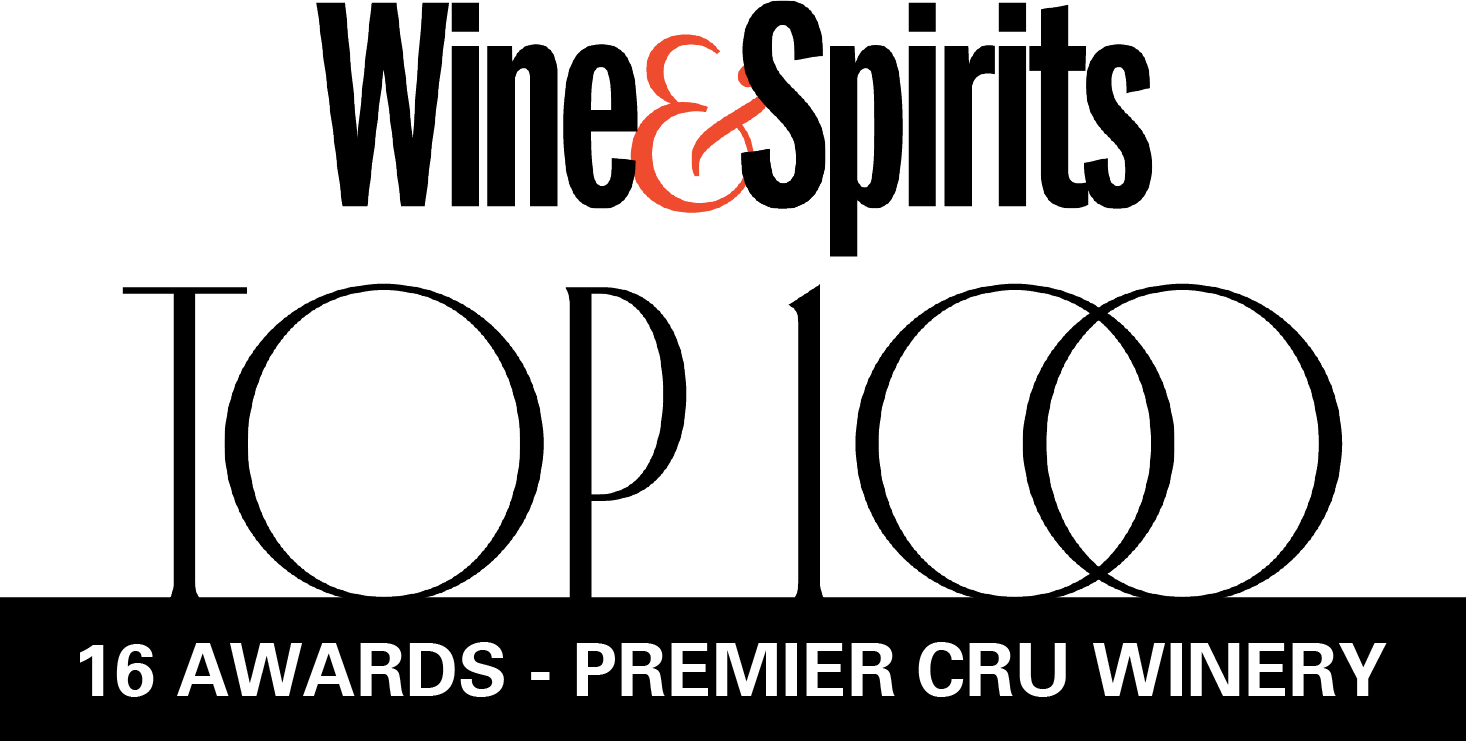