Named in honor of French-Canadians who settled the Walla Walla Valley in the first quarter of the 19th century, L’Ecole No. 41 this year marked 35 years as the region’s third-oldest winery. In 1983, founders Jean and Baker Ferguson remodeled a 1915 two-room schoolhouse of School District 41 into a winery. Today, its tasting room attracts about 30,000 visitors a year to Lowden, a small community along U.S. Route 12 between Wallula and Walla Walla. 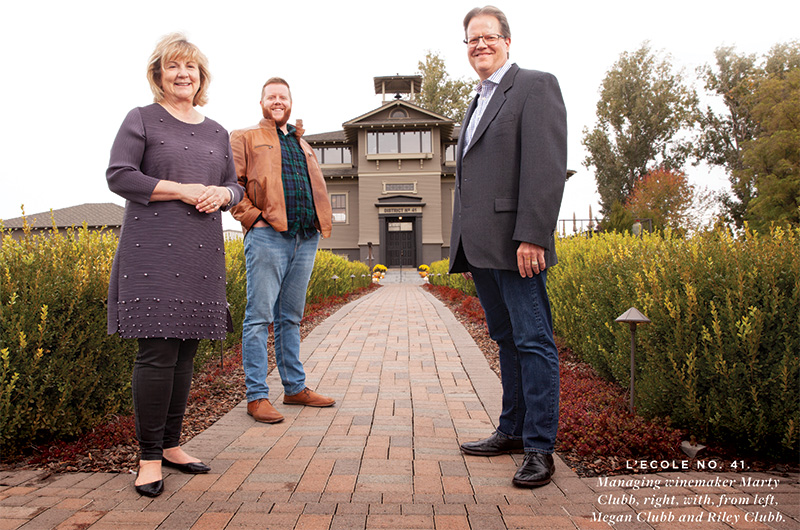 In 1989, Megan Clubb and her husband, Marty, took over from the Fergusons, Megan’s parents. L’Ecole No. 41 joined the valley’s early wineries in “setting a high-quality bar,” Marty Clubb says. Today, the region ranks among the world’s most respected viticultural areas. And L’Ecole No. 41 is one of the Northwest’s most honored wineries, having been included in Wine & Spirits magazine’s Top 100 Wineries of the Year 14 times. Its wines have frequently won top recognition in all the industry’s publications and wine competitions, including a gold and three silvers at the 2017 Decanter World Wine Awards.

The Clubbs’ son, Riley, and daughter, Rebecca, have worked at the winery and remain involved in business decisions while pursuing careers outside the wine industry. Marty Clubb, managing winemaker, closely monitors quality control for grapes, some grown in partnership with two other wineries and others in L’Ecole’s exclusive Ferguson Vineyard.